The speakers at FEAT KIDS on Thursday, 8 October 2015 are:

Names of speakers will be released one-by-one from now until the event. 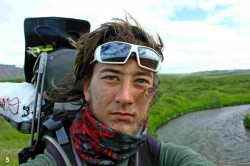 Bernie grew up in the flat terrain of Pretoria and over time discovered the idea of adventure through Drakensberg trips and weekends of climbing with family and friends.
“When I finished school I headed out in search for my own kind of adventures,” he says, “which led me to the Cape Fold Mountains, Iceland, the Alps and beyond.”
Bernie won Mountain Club’s Supertramp 2014 award and the Nightjar Adventurer of the Year Award 2014/2015. He received these awards for his solo, unsupported trek across Iceland in the winter of 2014. At the time Bernie was 19.
“My naivety took me through 27-solitary days of hiking and this trip tested my body, mind and skills to the utmost. It was an interesting journey with a lot of twist and turns, which made me fall even more in love with the idea of solo adventures. This leaves me with only two questions – what is next and when?”
Bernie will do a double FEATure speaking at FEAT Kids and FEAT. 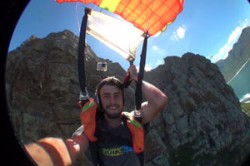 At age 13, JeanJacques saw the world from a new perspective when he did his first tandem skydive. A week after his 16th birthday, he started an Accelerated Free Fall course at Skydive Pretoria. “Flying wasn’t just in my dreams anymore, it was real. The sky and air became my playground,” he says.
In 2014, with over 10 years of skydiving experience and 2500+ jumps, JeanJacques represented South Africa at the FAI World Canopy Piloting Championships and was awarded Senior Protea colours. He dedicates much of his time to Wingsuit Flying and Speedflying off mountains and he is an accomplished B.A.S.E jumper.
“Weather has a very big influence on these sports so when it is not jumpable or flyable I spend a lot of time in the mountains, exploring and scoping new places to fly,” he says. He works as a FreeFall Photographer at Skydive Pretoria. 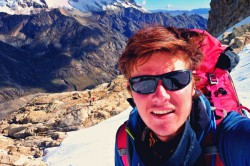 Kai’s love for the mountains came from clambering up and down Table Mountain whenever he could. “It was a place to have fun but also a place to get away,” he says.
At the age of nine, Kai was diagnosed with epilepsy. His self-confidence collapsed, but still he continued climbing.
Six-years later, in 2009, Kai summited his first major peak, Mt Kilimanjaro.
“With too little oxygen in my lungs and chilly toes, I was fired up to do another,” he recalls.
The next year (age 16), Kai was selected for Mike Horn’s Pangaea Young Explorers Expedition. There in the Himalayas, under the majestic shadow of K2, Kai’s team climbed an uncharted 6,000-meter peak and did research on the effects of climate change on the mountain environment.
Next up: Mt Elbrus in Russia. However, Europe’s highest showed him the dark side of mountaineering; from litter scattered around camps to his climbing partner almost dying due to bad decisions on the ascent.
Since then, Kai has travelled across Africa and South America, climbing big peaks and doing it in a manner which is responsible, sustainable and that contributes to communities. 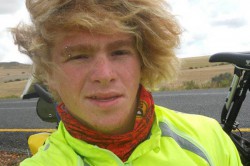 Keegan’s biking expeditions began in December 2011 when he used his year-end university holiday to cycle from his home in Witbank to Cape Town, a journey that took him 22 days. He repeated the 1,800-kilometre ride the next year but with only two weeks available, he put in more mileage each day and wrapped up the journey in 10 days. And he did it again in December 2013 – meandering route that took him 14 days.
And then… Keegan announced his new project: a biking expedition from Cairo to Cape Town, which he began on 2 January this year. He was chasing Robert Knoll’s World Record of 70 days. From early on, Keegan was plagued by injury and skin infections and by the time he reached Sudan, it looked like his record opportunity was lost. Four-days behind record pace, he cut out planned rest days to make up distance. He crossed Sudan, Ethiopia, Kenya, Tanzania, Zambia and Botswana before eventually arriving back in South Africa. En-route Keegan suffered from diarrhoea, severe sun burn, cramps and dehydration, survived a near robbery at knife point (twice), was spat on in Ethiopia and hit with rocks thrown by children. 59 days, 8 hours and 30 minutes after setting off from Cairo, Keegan reached Cape Town and clocked a new World Record time.
At FEAT Kids and FEAT Keegan speaks to us about this expedition. 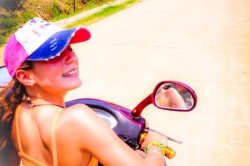 13 years old Paige lives in the Ezulwini Valley in Swaziland. “I have a river in my front yard and a mountain in my backyard – but if you think I live in the bush, think again… there’s actually a Woolies Food just one kilometer from my door,” she says.Paige enjoys school and she plays all sports, with her passion being for swimming and hockey. “Ever since I saw Chad le Clos winning in the 2012 Olympics, he’s been my inspiration to train hard, but if I saw him in real life, I think I would just faint straight away,” she says. Paige swims for the Swazi National team.

Paige says that her dad, Darron Raw, is not normal. “He tends not to play golf, watch TV or take the easy way between A and B. He and my mom run an adventure business, which is something to do with scaring people to the point when they think they’re dying, but when they are not really. For some reason people like to be bashed down white-water rivers, bumped and bruised in caves and tipped off mountain-bikes. I’ve heard so many people say, “I nearly died” that it is a miracle that I haven’t grown up to have thanatophobia –  the fear of death.”

Paige loves travelling because of the tingly feeling she gets when she explores new places. “The real world is very different from what you see on television or on social media. I like to see things with my own eyes.  The real world is a lot nicer than our imaginations sometimes allow us to believe,” she says.

At FEAT Kids Paige speaks about her adventurous travels in China. 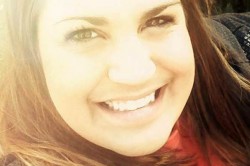 Robyn comes from a long line of scouts and thus it was inevitable that she too would join scouts by the age of 13.
“I have been extensively involved in all aspects of scouts – first aid, pioneering, hiking, camping and community service,” she says.
In 2011 Robyn received Springbok colours for scouting, a level that only 2% of scouts ever reach. This is the highest award attainable and the scout is required to complete all the requirements for the Springbok award before their 18th birthday. Among the requirements, the scout must complete at least 40 hours of community service, lead a hike of over 30 kilometres in unfamiliar territory and plan and construct a pioneering project.
“Now, as an adult in the movement, I am currently running my own troop,” Robyn says. She also belongs to a Rover crew. The Rover programme focuses on services to others.
Robyn studied a BA Law at Wits University and she is currently working with a public-benefit company involved in youth leadership development. 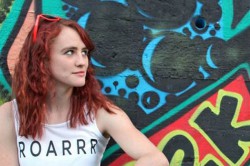 Sam started climbing seven years ago at the age of 12 and her focus has been sport climbing – lead and boulder.
“I do it for the adventure and the people because climbers are definitely the best kind of people,” she says.

Last year Sam was selected to represent climbing at the Youth Olympic Games and she placed 19th in the semi-finals at the World Youth Championships in New Caledonia. So far this year her climbing highlight has been 7th at the KAILAS bouldering competition in China. She has also won gold at competitions in Gauteng this year.

At FEAT Kids Sam speaks about ‘Behind the chalky hands’