Kai Fitchen’s love for the mountains came from clambering up and down Table Mountain whenever he could. “It was a place to have fun but also a place to get away,” he says. At the age of nine, Kai was diagnosed with epilepsy. His self-confidence collapsed, but still he continued climbing. Six-years later, in 2009, Kai summited his first major peak, Mt Kilimanjaro. 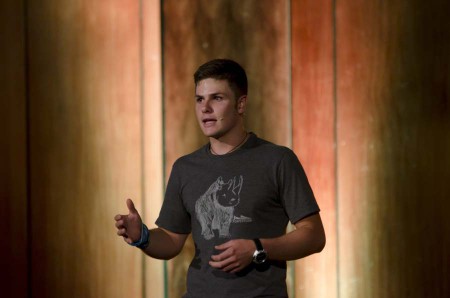 “With too little oxygen in my lungs and chilly toes, I was fired up to do another,” he recalls.
The next year (age 16), Kai was selected for Mike Horn’s Pangaea Young Explorers Expedition. There in the Himalayas, under the majestic shadow of K2, Kai’s team climbed an uncharted 6,000-meter peak and did research on the effects of climate change on the mountain environment.

Next up: Mt Elbrus in Russia. However, Europe’s highest showed him the dark side of mountaineering; from litter scattered around camps to his climbing partner almost dying due to bad decisions on the ascent.

Since then, Kai has travelled across Africa and South America, climbing big peaks and doing it in a manner which is responsible, sustainable and that contributes to communities.

Kai spoke at FEAT Kids (Jo’burg, 8 October 2015) about his adventures.