Willie Richards, the guy who does much of his training on the helipad of an off-shore rig, so enjoyed his 500kmplus adventure in December, that he planned a second one for April. 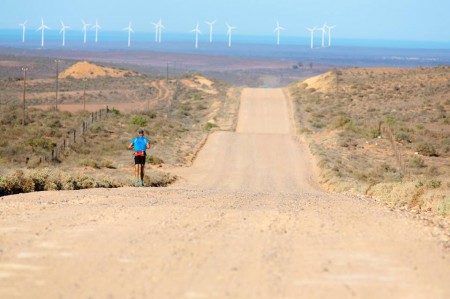 “As we left from Nuwerus this morning in the dark one thing came very clear to me the human hand is everywhere leaving its mark. On the side of the road in the first 5km there was so much empty bottles and trash. I started to pick it up. But it got so out of hand and after 5km I gave up and started to concentrate on my days running.”

On Day 2 Willie switched to paddling for a 32km stretch on the Olifants River from Lutzville to Papendorp and a 9km run into Strandfontein.

“From the start of the paddle the river was buzzing with bird life of all sorts. I wish I had more knowledge of bird species to name a few. The whole paddle was just so beautiful with all the birds and no humans in sight. As I got closer to Papendorp the wind started to increase but then I was met with the wonderful sight of Flamingo’s . They were everywhere. This at least made my slog against the wind bearable.” 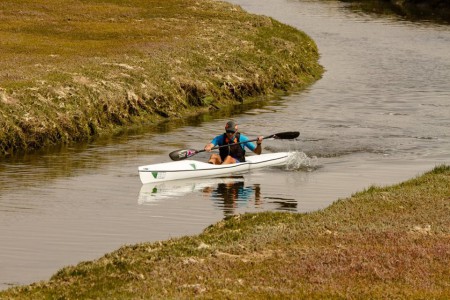 “The sand and camber really dealt out a beating on my left leg especially. The first 9km I was reduced to a hike more than a run, which frustrated the hell out of me. After that 9km of hell I got a break and could pick up my pace a bit.”

Before long Willie was back into the thick sand. “The run just felt for ever and the thick sad was relentless most of the way,” he says.

Later on, he could see the profile of Lambert’s Bay in the distance. “It started to lift my spirits again,” he says.

“This is where I started to mission on and just run through the pain in my left leg. The run was finished before I knew it and it was great to see Alfred and Deon waiting for me.”

For Day 4 from Lambert’s Bay to Elandsbaai, Willie was again on foot. The run started with more soft sand, which continued to niggle his left leg. 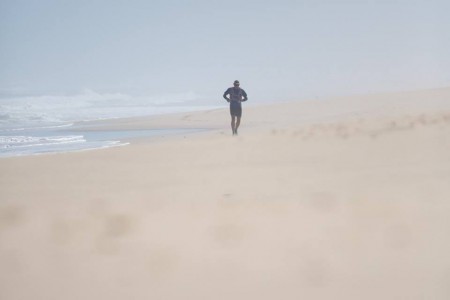 Before I knew it Elandsbaai came into view and I just kept going on past all the houses up to the cray fish factory and past the cliffs on the left. Today I stopped on the 30km mark. My plan was just to reach Elandsbaai which we did. It was a long hard day and my energy levels were low. Tomorrow will be my first real cycle leg, as the next beach area ahead does not really have many options for running and I need my left leg to take a break from the constant abuse.

Day 5, from Elandsbaai to Velddrif, Willie had his first proper cycle day.

“The day started off on the dirt road with a cycle next to the Sishen railway line. It was mostly flat with the odd bump. From the word go I was yet again confronted with plastic, tin cans, wrappers, and glass bottles. I commented to Alfred it just amazes me that each day I pack my backpack with snacks etc. and cover all these km’s and make sure that I bring my trash to the end point. How difficult is it if you drive your car and not carrying any of it to take your trash home with you or to the first trash can on route?” 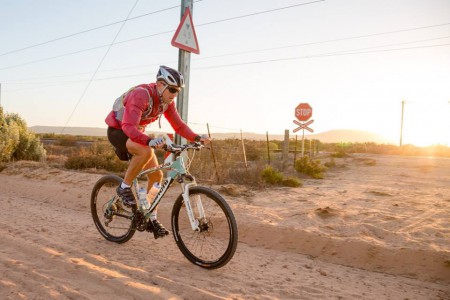 For the rest of the day Willie ate up the kilometres. “Before I knew it I arrived in Velddrif. This was meant to be our end point for day 5. But with ample fuel in my tank, we missioned on to St. Helena Baai. We arrived here with 86km on the clock for today. I am happy with our progress. We are also on a grand total of 255km,” he writes.

Willie was back on his surfski for Day 6 and a 22km (3hr) paddle from St Helenabaai to Stompneusbaai and a 28km run to Paternoster.

“The first bit of the paddle was not too bad, just chilly, and I even had a couple of small runs. But the moment I passed Britannia Bay I could see in the distance that there was some serious wave action to my right in the deep of the one rock bank. As I got closer I saw a small passage and sneaked through the middle of this bank. Just passing it the wind increased and the bay opened up to strong winds and deep water swell. The fishermen in the area also started to head for safety at this point. This was a clear sign for me to make my way as quick as possible into Paternoster bay.” 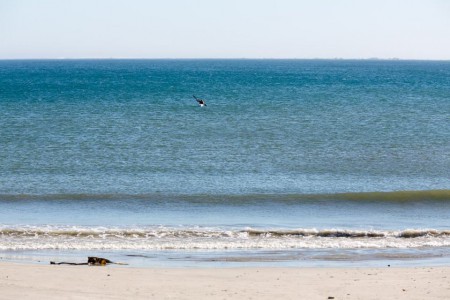 Day 7 began with an 11km cycle from Jacobsbaai to Saldanha and then two paddle legs from Langebaan to Churchaven to Kraalbaai. 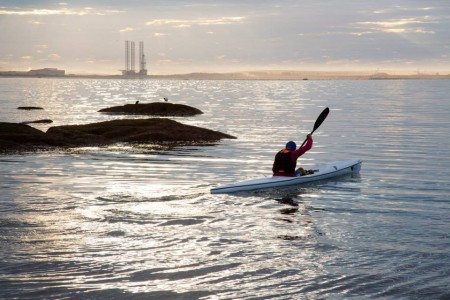 “The 11km cycle flew by and before I knew it we arrived at Saldanha. The conditions were perfect. I launched and started my 1st paddling leg from Saldanha to Pearlies. This 12km was a nice paddle with no real drama at all. Had a quick snack and one of Deon’s famous black coffees and started my next leg to Churchhaven. By now the SE wind had started to pick up a little more but it still made for nice cool paddling conditions. Churchhaven came into view at 21km. There I had a snack turned around and made my last leg to Kraalbaai where Deon and Alfred were waiting. Overall distance for today is 40km. It was not as long or hard as any of the previous days but, I am starting to feel the everyday abuse to my body.”

Back on foot for Day 8, Willie headed into the West Coast National Park.

“Once started I followed a jeep track down to the beach for roughly 2.5km then a great wide beach opened up for me. The ocean was thundering to my right while I was enjoying the flat beach run. Yet again the same image confronted me on the beach with loads of plastic debris buckets, crates, bottles and the odd buoy from fishing vessels all covered the beach to my left. Another thing that was upsetting was the total of 3 dead baby seals and one bigger one over a stretch of 11km and then numerous dead sea birds along the way. This makes me really wonder what is the reason for their deaths. Is the human hand to blame for this yet again?”

On Day 9 Willie headed for Darling and the site of one of his sponsors, Darling Brew. He started from the !Khwa ttu Nature Reserve situated on the R27. He put in 33km on foot.

“Kevin Wood from Darling Brew led the way on his mountain bike and I followed on foot. It was one of the nicest trails I have run in a while after all my thick sand beach runs. Before I knew it we arrived in Darling and I started my next section next to the railway track out of town towards Malmesbury.” 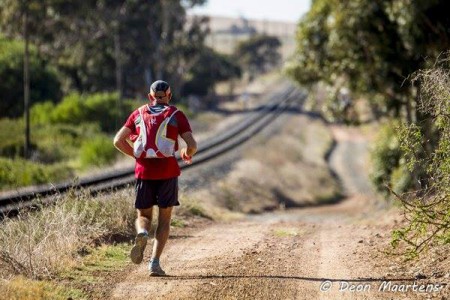 With two days to go, Willie’s Day 10 included a bike ride from Darling to Grotto Bay and a beach run to Silwerstroom. 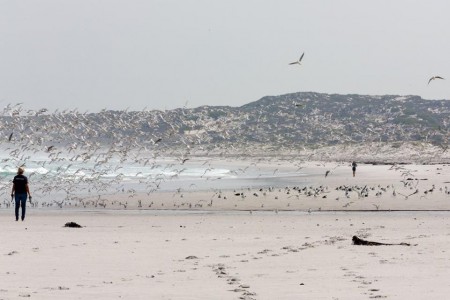 “The owner from Bok se Baai met up with me and he said that once a week they clean up the beach area along his property and he is shocked with the amount of trash left behind. Guys my whole trek down the coast I have seen so much rubbish and marine trash washing up on our coast. We have a serious problem ahead of us.”

Willie’s 11th and final day took him to the Fallen Angel’s animal shelter, which he supports and for which he raises funds (see the 500kmplus Facebook page).

My last day started at Silwerstroom strand with a wonderful beach run all the way to Koeberg Nature Reserve. This section of coast was the worst littered part with plastic debris ranging from plastic bottles, containers and fishing line. A majority of the debris I could clearly see was from fishing vessels or ships that has passed this area. I don’t know how we will get this massive problem resolved?

Once reaching Koeberg we started to follow the tar road out towards Fallen Angles. I was greeted with a wonderful sight at 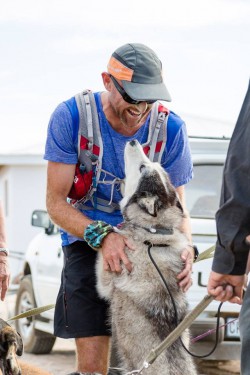 Fallen Angles on my arrival. Shireen and other caring souls from Fallen Angels were waiting for me with an array of dogs from the Shelter. This was such a great welcoming for me.

After a quick chat I started my way back out and as I neared the school where my son Liam attends in VanRiebeeckstrand, I reached my 500km mark. A good sign for me!!!

He stopped for lunch at Melkbos but the moment he started to run, after cooling down, his muscles seized.

Alfred and Deon proceeded on towards Kreeftebaai and I started to walk to meet up with them there, I was so frustrated. I limped all the way to Kreeftebaai where I quickly iced my legs for 30 minutes. This brought some relieve and at 15H00 I took on the last stretch to Big Bay where my family, friends and a couple of happy Fallen Angels were waiting for me (very happy to spend time on the beach). Day 11 total km’s achieved was 39.65km, this pushed us up to a Grand Total of 511km. 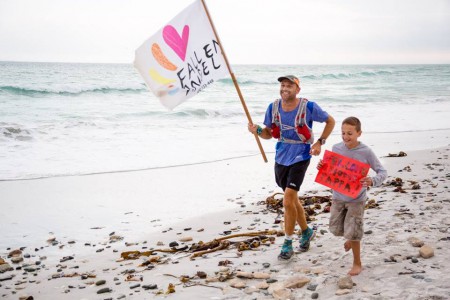 What an adventure! Well done Willie.

Willie had two superb guys as his support team, Alfred and Deon.