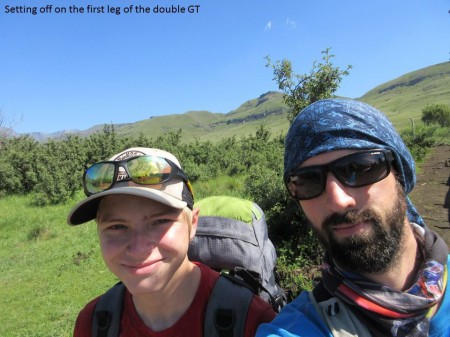 “Mike and I did back to back Drakensberg Grand Traverses over December 2016/January 2017. Andrew joined us for the return traverse. The first GT went well, finishing in 127h06 and complying with the speed GT rules. The second GT was on track for about 100 hours, till rain forced us to spent 2 nights at Sani, costing us the status of unsupported, and almost forcing us to abandon the attempt. We finished the second traverse in 126h55.”

Shortly after completing the double GT he wrote, “So a double Drakensberg Grand Traverse can actually be done – but it is much harder than one might expect. About 450km in a total time of 15 days 7 hours 50 minutes”.

The bar has been raised.

For DGT times and records, visit this FEATs on Foot page.