You’ve heard of the Drakensberg Grand Traverse but have you heard of the Jonkershoek Marathon? This is a route where hikers attempt to climb seven peaks in the Jonkershoek mountains, near Stellenbosch, in a day. The route is just over 30-kilometres in distance with 3,000-metres of elevation gain.

The following was written by Extreme Lights brand ambassador Coos Diener about route and the history of this challenge (with a little editing by us to trim the piece). 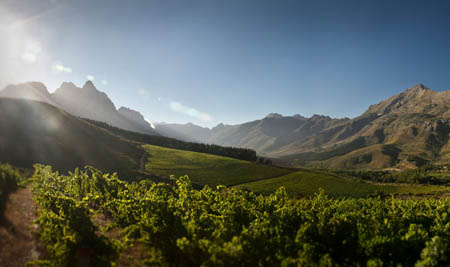 Behind Stellenbosch lies a horseshoe-shaped valley called Jonkershoek. The entrance to the valley is marked by Botmaskop on the northern flank and Stellenbosch Mountain to the south. These two peaks lie less than five-kilometres apart in a straight line, but the ridge connecting them is about 30-kilometres long and presents a very unique hiking challenge. 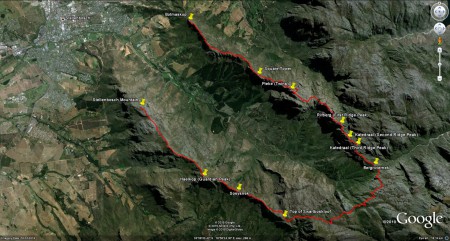 This challenge was first completed by three Matie students on 19 May 1962 in 19 hours and 30 minutes.

Two months later Ernst Lotz, who wrote “Jonkershoek en sy berge” the definitive guide to the valley and its mountains, raised the bar to a very impressive 14 hours.

It should be noted that the convention is to measure only the time taken to travel between the trigonometric beacons on Botmaskop and Stellenbosch Mountain. As such, the approach and descent time, which takes around three hours, is not included.

Since 1962, the Jonkershoek Marathon, as it is known to the hiking fraternity of Stellenbosch, is seen as a challenge for the very fit and adventurous mountaineers.

Each record seems to stand for about a decade and that it has only been held by Stellenbosch locals is a testament to the technical nature of the challenge.

An attempt to complete the traverse should best be undertaken when lots of daylight is on offer and when the weather is still relatively cool, probably around October/ November. In these months there should also still be plenty of water available in the mountains.

Due to the remoteness of the route adequate rain gear, warm clothing, a basic first aid kit including a whistle and space blanket, and enough food to last 15 hours should be carried. Water is, in general, scarce on the ridges and hence water to last three to four hours of strenuous physical activity (in the order of at least 2 litres) should be carried and replenished whenever possible.

Before any attempt or scouting trip, necessary permits should be obtained from the CapeNature office in Jonkershoek. The safety register at this office should also be completed since any rescue attempt would have to be coordinated from there.

Only a quarter of the route follows established paths. The Marathon is better classified as a long hike, done at a fast pace, that demands lots of navigational and mountaineering skills to complete. It also requires many scouting trips, not only to familiarise oneself with the route, which in sections is only marked by strategic cairns, but also with the various escape routes.

There is no official route description, although most of the route can be deciphered from the individual descriptions offered in “Jonkershoek en sy berge”.

It is not impossible to figure out a route on your own: Michael Owen and Robyn Kime completed the marathon in a very respectable 12 hours 30 minutes in 2013, but only after they undertook various scouting trips.

By far the best way to get to know the route is to join either the Stellenbosch section of the Mountain Club of South Africa or the Berg-en-Toerklub of Stellenbosch University. Both clubs undertake regular hikes in Jonkershoek and in this way the peaks can be explored one at a time and along various routes which can serve as escape routes in case of an emergency or bad weather. However, there are many sections that are not part of any trail and these would have to be explored on your own.

The marathon should never be attempted alone since some of the peaks are just far too remote and cell phone reception is sketchy at the best of times. Three to four people is probably the optimal group size.

It is definitely not for the faint-hearted and few people have done it more than once since the effort has been compared to that of an Ironman event. As always, there are those for whom the challenge is simply irresistible. Record holder Henco’s father, Retief Jordaan, has made eight attempts. He successfully completed six and achieved a best time of 10 hours 05 minutes at the age of 55!