Bagging all khulus in the Drakensberg

In December Jonathan Newman and Andrew Porter completed the challenge of ascending every khulu in the Drakensberg. A khulu is a peak in the Drakensberg that sits at over 3,000 metres above sea level. There are dozens of them. 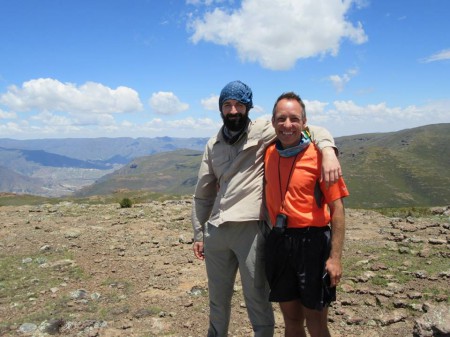 On the Mountain Backpackers Club website, they initiated a Khulu Challenge back in 2011. They specify 28 peaks and define the challenge as follows:

For the purposes of this competition, a ‘Khulu’ is a Drakensberg peak of over 3300 metres (approximately 10 000ft) in height, above mean sea level, that is situated on the border or wholly within South Africa.. There are twenty seven of them with most on the watershed or border between South Africa and Lesotho. We have also included Thabana Ntlenyana in our list, despite it being wholly in Lesotho, simply because it is there. All of the peaks are walkable and no technical climbing is required.

Scotland has its Munros (Scottish peaks over 3000 ft), the English Lake District has its Wainwrights, and there are groups in the UK known as Corbetts, Grahams and Donalds, so the concept is not new.

I asked former FEAT speaker Andrew Porter about khulus and how many of them there are that are over 3000 metres. He replied,

“I wish it was so easy. In the 1994 MCSA journal, Cliff Murch suggested the concept of a khulu as a 3000m peak within South Africa. The border is a bit vague, and the definition of a peak needs some work. As such, Murch missed a few peaks and also added a few that do not belong. To make sure, Jonathan and I each bagged over 50 extra bumps so that one day when the list is better defined we are sure we will have bagged everything on it.”

After wrapping up his khulu adventure Jonathan announced, “It took a few days short of seven years, over 4000km of hiking in the Drakensberg (not counting out of Berg training), and 110 hikes to get to the point reached in this photo”.

If you’re keen on khulu bagging and other Drakensberg pursuits, see this recent post from Jonathan on 7 January 2017 for ideas…

“And so Mike Van Wyngaard joins the list of people who have done 1000+km of Berg distance with 1,198km in 2016. There are no official stats for this, but not too many people have actually done this. He completed the Khulu Challenge, and also got his 100th khulu in 2016 – all feats that few have ever achieved. Now he needs four more passes to hit the magical 50 passes number.”

Yes, khulu bagging, >1000km in the Berg in a year and 50-passes hiked are worthy challenges.

UPDATE: Note that Jonathan has clarified that he and Andrew have all the non-technical khulus. See Jonathan’s note below.

It is all the non-technical summits. Technical being defined as a route that was listed on Murch’s list as climbing, and that has a route description on the MCSA rock climbing routes list. So Andrew has 7 technicals to go, and I have 20 left (there are 22 on the original list – although I rate Thaba Ngwangwe shouldn’t be classified as a climbing peak, nonetheless we have both done that one. I have also done Sentinel).

There are also other technical summits that weren’t on Murch’s list – such as the Middle Injisuthi Triplet, Thin Dog and King Kong which may warrant inclusion but require additional research.

As a matter of interest, I did 168 summits, including all 138 non-technical khulus on Murch’s original list, and 2 of his climbing peaks. There are other bumps I have done, but not included, such as Sur Xeni and Sur the Gable which won’t qualify as khulus under any proposed definition.

Thabana Ntlenyana is not a khulu as khulus have to be in SA or on the border. Thabana Ntlenyana is about 6km from the SA border. The MBC Khulu Challenge includes it with the 26 highest summits in SA (all the 3300+m peaks, making 27 peaks in total) as a symbolic measure – being the only ultra-prominence peak in the Drakensberg.

Andrew and I have both done some Lesotho 3000m peaks – although Andrew has done far more than I have, though. Lesotho peaks like Tsepeng (3431m), Thamathu (3328m) etc have been summitted by both of us.